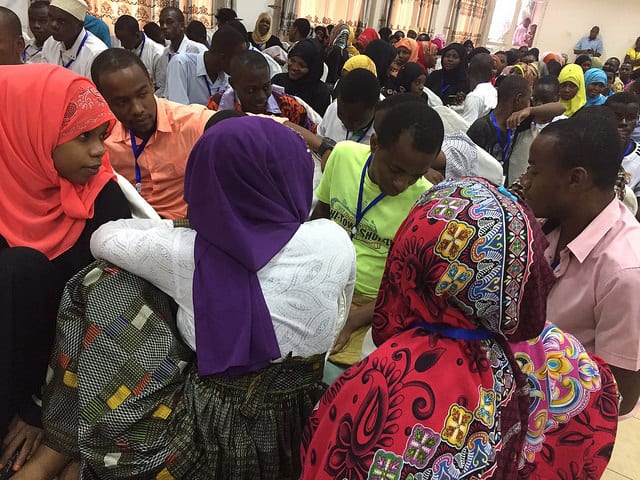 Zanzibar is 98 percent Muslim and it has a strong Muslim and Arabic culture, and a very small Christian population.

When we had our first Global Leadership Summit event in Zanzibar in 2015, we planned for 150 people to come. But the day before the Summit, we had more than 700 people registered! We even had to seat people outside the auditorium, because the auditorium could only hold 500 people. The room was packed!

How does something like this happen? They came – for one reason – respect.

When we hosted the GLS in 2014, in Dar es Salaam, Tanzania, a lady named Fatima came from Zanzibar.

Before Fatima came, she called us and asked, “I’m a Muslim, and during the afternoon I would love to go and have a place to pray a Muslim prayer. Will you allow me to do that since the Summit is done in the church environment?” and we said, “Come, and we will figure it out!” So she came.

The team in Tanzania was surprised we were bringing the GLS to Zanzibar.

In Zanzibar, 98 percent of the population is Muslim, and fewer than one percent are Christian. With the political tension that existed when we started, we were surprised at the number of people who came. And it wasn’t just the number that surprised us, it was the impact the GLS made.

The next year, when we went again, one of the top government officials came because of testimonies he heard the previous year. One of the topics was from Joseph Grenny on crucial conversations. During that time, Zanzibar was having very difficult political issues. Parties had to sit together to talk about the issues that matter in their country. So when we showed that talk on crucial conversations, it made all the difference!

Thank you for bringing the GLS to Zanzibar. You are making a difference!

Your financial support has been so much help, especially in Tanzania, Zanzibar and other parts of the world. You have taken the GLS to where it has never been before. Thank you very much!

Software Consultant; Champion for the GLS in Tanzania and Zanzibar

Mbutho has more than 15 years of experience in information security assessments and auditing. As a software consultant, he has worked with international organizations, government institutions and private companies. He also spearheads The Global Leadership Summit in both Tanzania and Zanzibar, and is particularly passionate about giving youth leadership development training and inspiration.